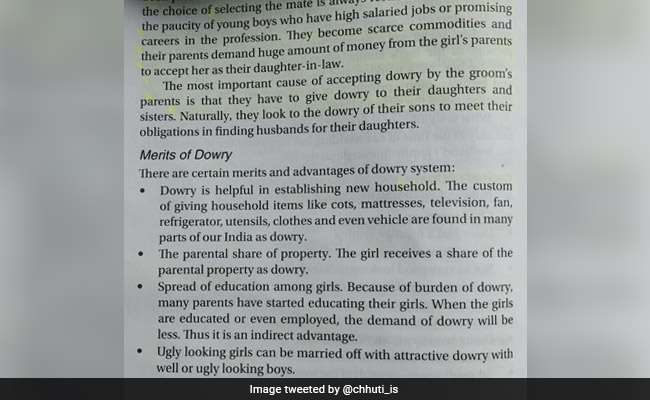 The announcement came on Tuesday after a severe backlash on social media.

The publishers of a college sociology textbook, which listed the merits of the dowry system, said that they have decided to withdraw the book from the market with immediate effect. The announcement came on Tuesday after a severe backlash on social media.

The publishers, ‘Jaypee Brothers Medical Publishers Private Limited’, on Tuesday issued a statement over the content in the title, ‘Text-Book of Sociology for Nurses’, in which Page 122 of the book mentions merits of dowry.

In its statement, the publisher has said we have taken immediate steps to withdraw the book from the market.

“We would like to inform you that we have taken immediate steps to withdraw the book from the market. We assure you that Jaypee is a responsible publisher and has been serving the medical community for more than 5 decades now. We take such matters with utmost seriousness and shall continue to strengthen internal processes to avoid such incidences in future,” the statement read.

Rajya Sabha MP Priyanka Chaturvedi slammed the publishers of the book. In a tweet, she wrote, “TEXTBOOK SAYS DOWRY HELPS ‘UGLY GIRLS’. This kind of regressive mindset is there despite anti-dowry laws being there in the country.”