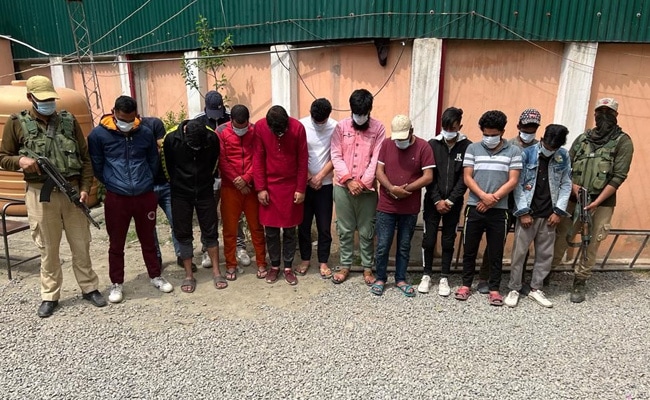 Thirteen persons have been arrested for raising “anti-national slogans” inside Jamia Masjid Srinagar, the police said. Slogans were raised by group of people after congressional prayers on Friday.

This is the second major crackdown on people involved in sloganeering inside the grand mosque since 2021.

The mosque was recently allowed to resume Friday congregational prayers after a long break.

In the wake of abrogation of Jammu and Kashmir’s special status under Article 370 on August 5, 2019, the mosque, which is the biggest cultural and religious centre in the Valley, was closed.

Since then, it was largely closed due to security reasons and Covid restrictions.

Police said 24,000 people offered Friday prayers in the grand mosque but a handful of people raised anti-national slogans and resorted to hooliganism.

“After culmination of the prayers about a dozen persons started anti-national and provocative sloganeering, for a while this was joined by a couple of others as well, while most of the gathering remained aloof,” said Rakesh Balwal, SSP Srinagar.

He said the mosque management committee tried to stop the sloganeering and hooliganism and there was altercation between the two sides.

“This created a situation of ruckus inside the mosque leading to clashes between them. Later the hooligans were dispersed outside the mosque by volunteers (of Mosque committee),” the officer said.

The police said it was a well-planned conspiracy and those involved in sloganeering had received instructions from Pakistan.

“It also came out during initial investigation that the accused in furtherance of a well-planned conspiracy had received instructions from Pakistani handlers of terror outfits to disrupt Friday prayers in Jamia masjid and create law and order situation,” said Mr Balwal.

The head priest of the iconic 14th century mosque – Mirwaiz Umar Farooq is under house detention since August 2019. He was not allowed to lead the prayers.